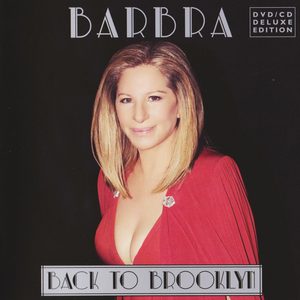 Barbra Streisand is an American singer-songwriter, author, actress, writer, film producer, and director. She has won two Academy Awards,eight Grammy Awards,[five Emmy Awards including one Daytime Emmy, a Special Tony Award, an American Film Institute award, a Kennedy Center Honors award,a Peabody Award, and is one of the few entertainers who have won an Oscar, Emmy, Grammy, and Tony Award.
She is one of the best selling female artists of all time, with more than 71.5 million albums in the United States and 145 million records sold worldwide. She is the best-selling female artist on the Recording Industry Association of America's (RIAA) Top Selling Album Artists list, the only female recording artist in the top ten, and the only artist outside of the rock and roll genre. The legendary Barbra Streisand gives a homecoming concert in “Back to Brooklyn”. Streisand is joined by Chris Botti, Il Volo, and son Jason Gould for two hours of hits, including nine songs she has never performed on a concert stage.
---16/44.1, Upsample 24/96 by Weiss Saracon .
---WAV/FLAC
---Buy album for HK﹩160.
---This album is available to users in Hong Kong and Macau only.